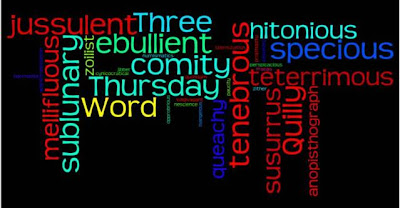 I think one of Quilly's missions in life is to help us overcome writer's block. Unfortunately, the words in Three Word Thursday do not always contribute to a cure. Obsolete, discarded, and unloved words find their way into her meme and challenge us to think beyond the obvious. Well, I'm not sure I was able to succeed in that this week, but I have given it a valiant try. If you read this and think you can do better, you probably can, so please do! Join us! And leave comments!

p.s. I really struggled with misqueme -- I couldn't decide whether it was a noun or a verb. Quilly used it as a noun which 'sounds' right to me, but when I googled it, others used it as a verb. Oh well. Maybe that's why it's obsolete.

Muriel awoke feeling vaguely out of sorts with the world. Wondering whether she should indulge the mood or shake it off, she pulled herself out of the warm cocoon of covers and plodded to the kitchen. Her brain screamed, “COFFEE!” but the carafe was empty. “Oh, the pain of having to make my own coffee and then wait for it to perk,” she grumbled.

The coffee maker began its comforting hum of noises that indicated the precious brew was on its way, so she turned her attention to the newspaper headlines. It was all bad news, gloom and doom. She flipped the paper over to read the headlines beneath the fold. They weren’t quite as lurid, but they were still far from anything that would inspire a person to go out and face the day.

Muriel sighed and pulled the Food section out. At this she brightened. The first page story was about a new confectioner’s opening up in her area. She wondered whether this tragematopolist would carry her favorite German goodies, Kinder Eggs. Muriel loved how the thin layer of absolutely delicious chocolate concealed a capsule in which a small toy was secreted. One of her favorite tricks was to remove the toy, seal the capsule, and poke it into the pot of a giant plant at the mall. She imagined the finder of the capsule as different people. Its vacivity disappointed a small child, annoyed a gardener, or even threw a Secret Service agent into full-alarm mode if the First Family was shopping nearby. These scenarios led to endless imaginative plays in her mind, none of which ever seemed worthy to set down in her writing.

Muriel was shaken out of her reverie when the coffee pot beeped, and armed with a fresh cup, she began her day in earnest. Seated in front of her computer screen, she was once again confronted by her stalled story. When she had last left it, the heroine had misquemed the sheriff, the boy was still in danger and the hero was hurt. The dogs were clearly the solution to the problem but how could she work them in?

Posted by SouthLakesMom at 7:31 AM

Loved the last para. We writers all need a break from our stories :-)

I thought...did I miss something. I couldn't have I thought. And then the last paragraph...brilliant my friend. Aloha :)

Ha! I wondered where Muriel came from. Too funny.

Have the dogs eat the sheriff? :o

You are all too nice. I was waiting for someone to cry "FOUL!"

Anthony - glad you liked it. It did seem a little like cheating. ;-)

Quilly - thanks for the suggestion, but I don't recall him being quite to their taste!

I'm in love with Muriel! I really enjoyed this story. And yes, pass the coffee LOL.

Great story. We find your character very human.
We dragons will attest that according to the best ancient authorities the word is a verb.

Since I have three stories hanging I know the feeling. Good way to use the words.