I missed Three Word Thursday last week as my muse was frozen.  I don't think it is completely thawed this week but working on it.  Quilly's words are engaging, so come play along! 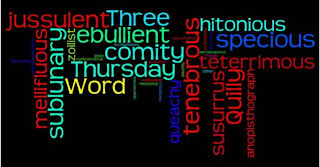 
The detective walked into the commercial kitchen and sniffed appreciatively.  His trim figure belied his love of all things fresh-baked. He turned to the chef and inquired, “scones?”  Chef Charles bobbed his head in a restrained assent. “Yes, but they’re for an event.  Back off.”
Hanging his head, the cop ambled over to the crime scene where the technicians were almost finished. He turned on his heel to face Selma. “Are you Selma Rodridguez?” he asked.  She nodded.  “You are under arrest for the murder of Theodore Deum. You have the right to remain silent.” The Detective finished reading her her rights and asked if she understood them. Selma said “yes” and then added, “but I didn’t kill him.”
She looked at the name tag on the cop’s chest and said, “Detective Sims, this arrest will extirpate what little remains of my career as a chef. On what evidence are you arresting me?”  The officer replied, “your prints are all over the murder weapon.”  Selma’s eyes widened as she responded, “it’s a kitchen! My prints are all over all the knives here!  Weren’t there any others as well?”
Sims looked uncomfortable and admitted, “well, yes, but we understand that you had more reason to hate this guy than most. He’s been blackmailing you hebdomadally for the last six months.”
Selma shook her head slowly. “No. I will not let that facinorous man continue to ruin my life. Yes, he was blackmailing me. I had been involved in a Ponzi scheme back in New York that claimed many victims. But I was a small cog in a really big scheme. I paid back my share and had started a new life.”
Chef Charles had moved closer to the pair. “So why did you pay him, Selma?”  She looked at Charles and offered, “because I was doing so poorly here that I thought you’d use it as the final reason to get rid of me.  I was finally making a life here in Peoria and I didn’t want it to end. But I didn’t kill him.”
The officer put his arm out to her and asked, “do I need to put cuffs on you or will you come quietly?”  She squared her shoulders and said, “I’ll come with you.  Charles, will you call my father please? Tell him I won’t be home for dinner this evening but he’s not to worry.”
Posted by SouthLakesMom at 1:59 PM

And I am glad you've defrosted enough to play this week! Please use some of your snowed in time to complete the survey up on my blog -- and thank you!

Hmmm the old Ponzi scheme at work. Great story and use of the words. I do hope this continues on. Charles is in this deeper than we know I bet. Well done :)

wow, this is intriguing and well written. loved it!
(i checked the previous installment too)

Quilly -- already did! I had a little difficulty though because the REASON I trust what you write is because it is YOU and I know your belief system....but there was no way to say that a "relationship" preceded my trusting your posts...and there was no way to say "I trust Q but not particularly the products . . . " It is really difficult to write good surveys though...

Juliana - thanks! Hope I can remember the thread each week!

I'm glad you managed to get a little unfrozen this week, while still under a blizzard! I was thinking of you last night while baking the kids some banana-brown sugar muffins; the cold weather IS good baking weather!

(Great use of those facinorous words btw!!)

Very intriguing. I am waiting for more.