Our regional advocacy group offers a course called, "Confident City Cycling."  I took it earlier this year and it was informative, but I didn't think riding in the city was all that challenging . . .

Okay, I was wrong!

Yesterday I decided to meet up and take a ride with some friends I'd "met" through a Women & Bicycles group on Facebook. We are all somehow connected through the Washington, DC area, and mostly through the aforementioned regional advocacy group, WABA (Washington Area Bicyclists Association).

We wanted to ride the entire "Metropolitan Branch Trail." Sounded good to me, to ride a new trail? What I didn't realize is that very little of it is ACTUALLY a trail.

I drove from my house to the nearest Metro stop. (I actually backed out of the driveway before I realized I'd forgotten the bike!). I parked near the trail in that town, and then jumped on my bike to head towards the city. I had cleaned out my car earlier in the weekend so instead of the cycling jacket I thought I'd find, I had only a heavy winter coat. Since it was about 47 degrees, I wore the coat.

At the 5 mile point I realized I needed to get on the Metro so I rode into a station and hopped on. Fortunately, it was a holiday schedule so bikes were allowed on the train during rush hours. Unfortunately, some of the people going to work didn't realize that and were a little bit grumpy about sharing the space with me. Kind of like sharing the road...

Finally got to Silver Spring station and hopped out to meet Liz and Ursula. Jessica soon joined us and off we went. Thank goodness Ursula knew where she was going!

There was one part of the trail that had an awesome view of the Capitol, although this is not my photo it is what I saw:

At Fort Totten (one of the original forts around DC that were placed to protect the Federal City during the Civil War), we picked up Andrea, one of the bright idea women who had suggested the ride.

We stopped to look at the trail info -- it will eventually be a dedicated use trail according to this board -- but who knows when that will happen? 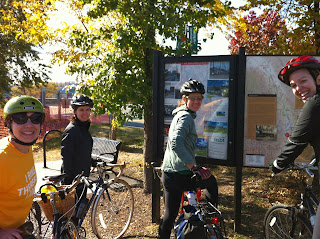 We continued down to the Union Station area where the trail terminates and went to Ebenezer's Coffeehouse-- Coffee with a Cause. 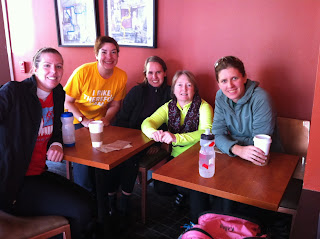 Jessica, Andrea, Liz, Me, and Ursula

After laughing and talking WAY TOO long, everyone realized they needed to get moving. We all went different ways except for Liz and me as she led me a merry chase across DC.  We had to get from Union Station, EAST of the Capitol to Key Bridge, Northwest of the same. It was "up and over"...and this is when the extreme City Cycling came in. Liz kept asking me if I was okay, and I was. As long as she was confident, I was. The biggest challenge was in Georgetown where the traffic was backed up. But, it's hard for a car to kill you when they're only going about 8 miles per hour when they're even moving.

It was a big relief to get back to Virginia and start riding. I rode about 5 miles and then hopped the Metro back to Vienna. Then hopped the bike to where my car was parked, and then pretty much collapsed into my car for the drive home.

Tired last night but happy. Very happy. I LOVE to try new rides, as long as I'm with someone else so at least one of us can call 911 if necessary!

How did you spend Veteran's Day?

You never lack for adventure. Loved to see the photo of the "group" - all of you smiling and "fit". What an outing!! It was business as usual here for Veteran's Day, Mister worked and daughter went to school. I thought of my Dad a lot that day and of others I knew who are/were in the military.

wow - that was QUITE an adventure! Glad it went well & you had fun. I had to work as usual - & in fact it's been so busy this week that I'm just now reading blogs!